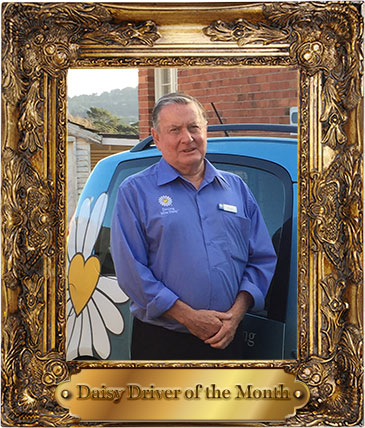 On Christmas Eve December 24th 2015, Roger was booked in to collect Mrs Thomas from her home and take her to a hairdressers appointment. He arrived just before 9.10, knocked on the door and when he heard Mrs Thomas say “come in” he opened the door and went in, only to find Mrs Thomas on the floor, where she had been since sun up the previous day, a very long 27 hours ago!

Roger immediately rung for an ambulance, asking Mrs Thomas if she needed anything as the phone was ringing. Mrs Thomas was so relieved to finally have help. There had been at least two knocks on the door the previous day when Mrs Thomas called out “come in”, no one heard her. She screamed out a few times and again was not heard, she thinks the phone rung about 15 times over the 27 hours, each time going to answer phone.

As they were waiting for the Ambulance to arrive, Roger did a quick walk around the house and property to have a look just in case she had been broken into. Roger helped direct the Ambulance into the driveway when it arrived 4 minutes later and as the paramedics went inside to help Mrs Thomas, Roger sorted out care for the dog, arranged with the neighbour to lock the door after they had left and he even brought her washing in, legend!!

Mrs Thomas was found to have broken her arm in 2 places, broken her hip, she had an impressive war wound on her forehead and she had had a mild heart attack, which could have been brought on by lying on the floor for so long. She also had other cuts and bruising. I went and visited her a few times in hospital and the rehabilitation home during her hospital stay.
After 4 months and 4 days of being in hospital, I had the privilege of bringing Mrs Thomas home last week and today Mrs Thomas and her rescuer were reunited. She calls him her hero, he’s our hero too, so we know how she feels!!
Driving Miss Daisy…..so much more than just transport!!